International law firm Pinsent Masons has been named the most inclusive employer in the UK by lesbian, gay, bi and trans equality charity Stonewall in its Top 100 Employers list for 2019.

Pinsent Masons was the first in the legal sector to engage with Stonewall and feature in the charity’s annual review when it launched in 2008.

The firm has also been ranked among the UK's top trans-inclusive employers.

The Top 100 is the UK’s leading ranking of employers from across the public, private and third sectors assessing workplace inclusivity. It is intensely competitive, this year receiving a record number of entrants.

The firm has been commended for its range of inclusive policies and practices for lesbian, gay and bi staff, including the introduction of specific trans-inclusive employee training to create a welcoming environment for trans colleagues, clients and visitors.


Pinsent Masons has also been actively involved in championing LGBT equality across the UK, including supporting the campaign for marriage equality in Northern Ireland and working with school partners to build inclusive learning environments for young people.

"This is a very special achievement for us. It isn’t about reaching the top spot; it’s about what the Stonewall Workplace Equality Index stands for and what everyone engaged in it is working so hard to accomplish. Pinsent Masons was the first law firm to be ranked in the Index in 2008. Today the legal sector is represented by 16 firms. Our ranking recognises that like many other organisations we are championing LGBT+ inclusion in everything that we do. Pinsent Masons has created an inclusive workplace that enables everyone to be themselves; from our recruitment processes through to our engagement with clients.

"We have a responsibility to champion change in the wider community. Supporting initiatives such as the campaign for marriage equality in Northern Ireland play an important role in prompting progress on the equality issues that we believe must be addressed. We are also confident that our ongoing work with our Family Support Network and work with our school partners will help create safe and inclusive learning environments to ensure that future generations are guaranteed a discrimination-free start in life.

"Congratulations to all those who achieved a ranking in the Index. Working together we are all driving real change in the workplace and thereby ensuring that business works better for people."

Last year, Stonewall released research that showed more than a third of LGBT staff (35 per cent) have hidden they are LGBT at work and almost one in five LGBT employees (18 per cent) have been the target of negative comments from colleagues because of their identity.

"LGBT-inclusive employers play a crucial role in changing society by using their power and influence to proudly support LGBT people in their organisations. Our number one employer of 2019, Pinsent Masons is leading the way championing lesbian, gay, bi and trans equality in the workplace. They know that helping staff feel that they can bring their full selves to work doesn’t just make a huge difference to individual team members – it makes real business sense too. They are a shining example for others to follow on how to ensure all staff feel empowered and supported.

"Whether as senior leaders, managers or colleagues, we all have a part to play in making sure that our workplaces and communities are places that accept and support LGBT people, without exception."

In compiling the Top 100, Stonewall collects more than 92,000 anonymous responses from employees on their experience of the UK’s workplace culture and diversity. An overwhelming 93 per cent of non-LGBT employees who responded to the survey say they understand why their employer is committed to LGBT equality. 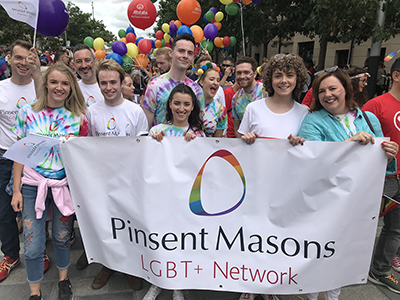