The Digital Single Market Copyright Directive (118-page / 715KB PDF) was approved in 2019 and EU countries must implement it in their national law by 21 June.

One of the most controversial elements of Directive has been a change to the liability of online platforms. Article 17 of the Directive says that platforms which allow users to upload digital content will be more liable than before if that material infringes copyright.

Previously, platforms were not said to be making a "communication to the public" when they allowed users to upload content. But that will change, and the operating of these platforms will be an act of communication by means of statutory definition.

The move is intended to ensure that content creators are more likely to get paid when their work is accessed, but industry and EU countries have expressed concerns about its operation. They fear it could result in 'over-blocking', where legitimate content is blocked by automated upload filtering systems. 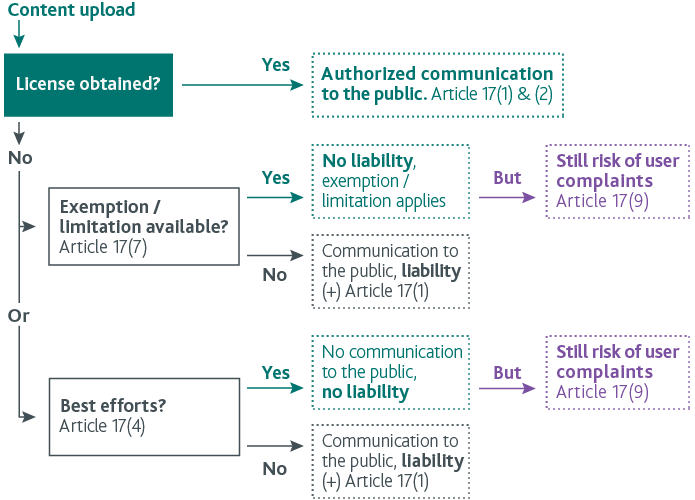 Graphic: How platforms can decide whether content breaches the Directive

Freedom of speech is seen as being at risk, as are intellectual discourse and the mutual exchange of ideas through quotation, criticism, review, caricature, parody or pastiche.

This has caused Article 17 to be very complex and its implementation in EU member states has been patchy.

To help navigate the competing interests around Article 17 European Commission organised a stakeholder dialogue whose six meetings in 2019 and 2020 resulted in a consultation paper which aims to provide guidance on how to handle Article 17.

The paper sought further engagement from stakeholders, and comments were received from a group of member states and from several rights holders. No consolidated version of the consultation paper has yet been published.

In the consultation paper the Commission runs through the various sub-sections of Article 17 of the Directive, giving guidance on the 'best effort' clause in Article 17(4) lit. b) and the measures that ought to be taken in order to prevent the blocking of works that do not infringe copyright. This might be because the use of the work is permissible under one of the limitations and exceptions. The paper also discussed complaint and redress mechanisms in some depth.

A central question in the overall debate was the structural tension that exists between Article 17(4) lit. b) and Article 17(7) of the Directive, between the obligation to apply best efforts to prevent availability of infringing content and the safeguarding of the ability to make available legal content. The stakeholders discussed whether disputed content should be blocked on preliminary basis while its legality is assessed. The Commission shows a tendency towards giving room and priority to Article 17(7) of the Directive and thus suggests to block only “likely infringing uploads, whereas content, which is likely to be legitimate, should not be subjected to automated blocking and should be available.” France was amongst those supporting temporary blockage. 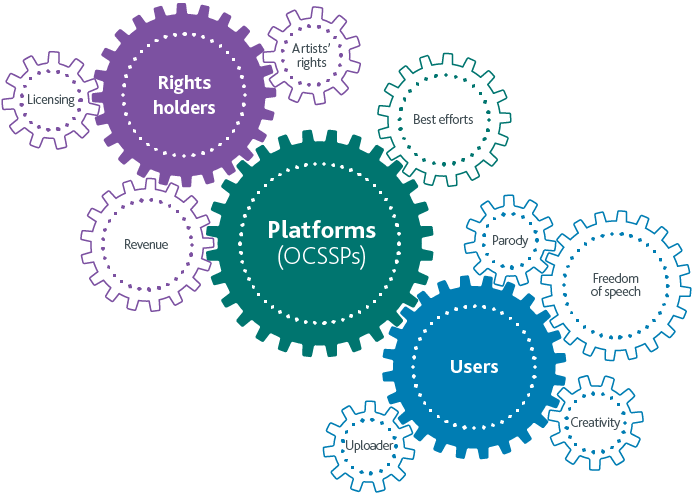 Graphic: Some of the issues platforms have to balance when making decisions

It remains to be seen whether the Commission will update its position. The implementation process is soon to be completed with the domestic laws being due to be enacted by 7 June. Of course, not all member states will meet this deadline. Still, the stakeholder dialogue provided a pan-European forum for continued discussion while the member states are drafting new sections to be inserted into their existing copyright laws.

Countries are navigating the issue at different speeds so we have analysed below the progress each country has made.