The volatile price of raw materials and energy supply are predicted to be primary causes of disputes in the energy sector globally over the next five years.

The finding stems from a major study conducted by Queen Mary University of London (QMUL) in partnership with Pinsent Masons. The results from the study also highlighted the impact that the energy transition, energy security issues, sanctions imposed on Russia, and policy instability is having on disputes in the energy sector – and that international arbitration continues to play a primary role in the resolution of international energy disputes.

At the heart of the study was a global survey, which ran from mid-July to mid-October 2022 and attracted more than 900 responses – from parties to energy-related arbitrations, disputes practitioners, arbitrators, academics, experts and arbitral institutions. Input received during extended follow-up interviews with more than 50 of the respondents further shaped the study. 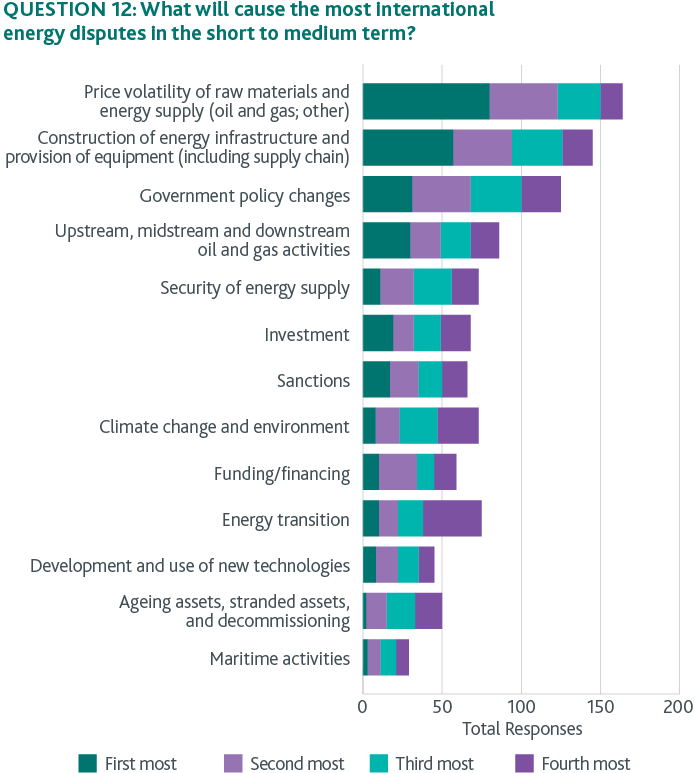 International arbitration expert Jason Hambury of Pinsent Masons said: “This is the first arbitration survey by QMUL for the energy sector in nearly a decade and could not be more timely given current geopolitical events set against the background of the energy transition agenda.”

“The survey reveals that the impact of the Russia-Ukraine conflict will continue to affect the sector for years to come. It is expected to be the driver for an increase in energy disputes over the short to medium term, with price volatility, security of energy supply, energy transition, sanctions and supply chain risk all being major causes of disputes. These will largely be resolved by arbitration, which end users still see as being the most effective forum for their resolution, albeit that improvements in how these arbitrations are conducted would be desirable,” he said.

Professor Loukas Mistelis of Queen Mary, who led the study, said: “For both the energy and the international arbitration communities it is critical to have the insights of key stakeholders in respect of whether arbitration continues to be fit for purpose and what is the impact of recent developments – from energy transition and climate change to the war in Ukraine and sanctions against Russia. The survey covers all the issues via quantitative and qualitative methods.”

Among the issues that the study explored were what the principal causes and types of energy disputes have been, and what they are expected to be in the near to medium term.

While the main cause of disputes in the past five years were issues arising from the construction of energy assets and the provision of equipment – including supply chain issues and raw material shortages – price volatility of raw materials and energy is predicted to overtake it as the primary cause of disputes over the next five years. The greatest increase in energy-related disputes is expected to arise in Europe.

“It is apparent that the main issues now facing the sector are the fluctuating cost of the necessary raw material inputs to develop, operate, and maintain energy projects and the energy unit prices which the projects are able to attain once complete,” according to the report.

Unsurprisingly, the study found that the transition to cleaner sources of energy is at the forefront of the industry agenda. Respondents to the survey believe disputes associated with the energy transition will increase in the next five years, with factors such as the adoption of new technology, the emphasis on delivering projects quickly to satisfy government incentive schemes, and pressure to comply with changing regulations among those cited as likely causes of dispute.

However, respondents believe the main impact of the energy transition on disputes will not be seen until nearer 2030 – or perhaps even beyond that date if energy security issues arising in the wake of Russia’s war in Ukraine leads to delay to the global energy transition. 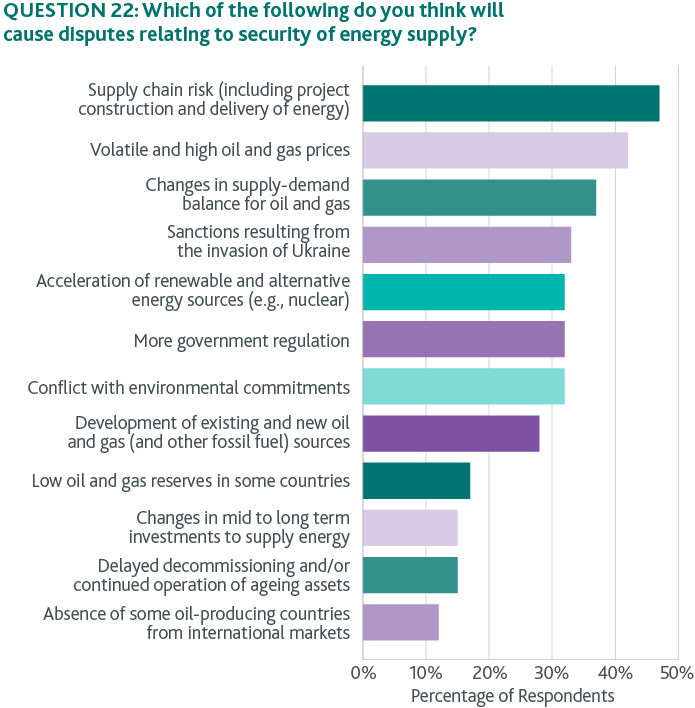 When asked to rank factors which they think will cause disputes relating to security of energy supply, 47% of respondents identified supply chain risk – noting that the logistical hurdles caused by Covid-19 have been aggravated by the current geopolitical environment. Other prominent likely causes of security of supply disputes identified by respondents include price volatility and sanctions, with the latter highlighted by respondents as having already had a major impact on industry specifically in the context of the response of governments to Russia’s invasion of Ukraine.

Approximately two-thirds of respondents believe the impact of international sanctions on the ability to perform pre-existing contracts will cause a rise in force majeure and hardship claims, and that suspensions and terminations have been and will continue to be on the increase due to sanctions too, in the short to medium term.

The most important features of arbitration highlighted in the study were the neutrality it offers, the scope to choose arbitrators, and the enforceability of awards. The technical expertise of the tribunal, counsel and experts, and the expedited procedures available, were the most important procedural elements of arbitration flagged by respondents. 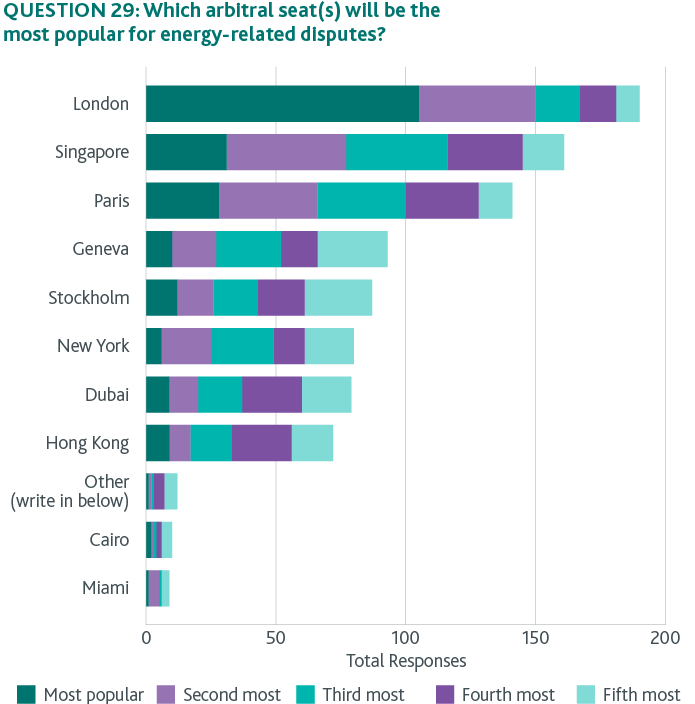 According to the study, the most popular seat for energy arbitration is London, with Singapore second. In Europe, Paris and Geneva were also identified as popular choices for the arbitration seat.

The study findings also provide an insight into the innovation and greater efficiencies stakeholders in energy arbitration would like to see introduced. Better case management at the initial stages of an arbitration and the greater use of technology – including virtual hearings and the provision by arbitral institutions of new or improved online case management platforms – were cited in this regard. Other feedback focused on the perception that arbitration was overly legalistic and unnecessarily confrontational, and that practitioners and arbitrators are not making use of the flexibility afforded to them, resulting in a lack of commerciality.

Further findings also highlighted that while arbitrations are becoming ‘greener’, green credentials have only a minimal influence currently on end users’ choice of arbitral service providers. However, some respondents said they expect this to change in the future – with one suggesting that having green credentials will become a “license to operate”.